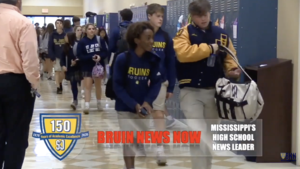 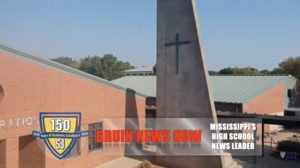 “Despite the fact we are a small school of about 400 students in a small state, our students competed head-to-head with larger schools here and abroad and finished second. That says a lot about the quality of students at St. Joe and in our journalism program.”

St. Joseph Catholic School, founded in 1870 by the Sisters of Mercy, is celebrating 150 years of faith formation and excellence in education. The school offers seventh- through 12th-grade students a rigorous college prep curriculum grounded in the teachings of the Catholic Church.

St. Joe, located at 308 New Mannsdale Road in Madison, just west of the Interstate 55-Mississippi 463 Exit, is accredited by the Southern Association of Colleges and Schools, the accrediting arm of Cognia.

Journalism is one of several electives that students can take at St. Joe.

Bruin News Now is in its fifth year and recently celebrated its 150th episode. The Mississippi Scholastic Press Association named Bruin News Now the state’s best high school newscast in 2017 and 2018; it was a finalist for the award in 2019.

“All my classmates and I are so grateful to have an opportunity to explore broadcast journalism at our age,” Dear said. “This award is a great reflection on our school and how strong and amazing our journalism program is.”

“Our students work hard every day to produce a quality, weekly newscast that is so professional it could easily be mistaken for a local TV newscast,” she said. “That kind of dedication is evident in every aspect of our journalism program and our entire school.”