Mrs. Cofer is actively involved at Liberty Baptist Church in Flowood, where her husband, John is the pastor. She has four grown children and five grandchildren. Her son, Stephen, is a 2010 St. Joe graduate. She loves her family, all things historical, and traveling. Mrs. Cofer's hobbies include spending time with her family and friends, reading historical fiction, antiquing, and watching classic movies. 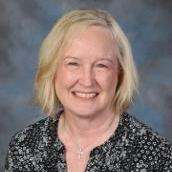